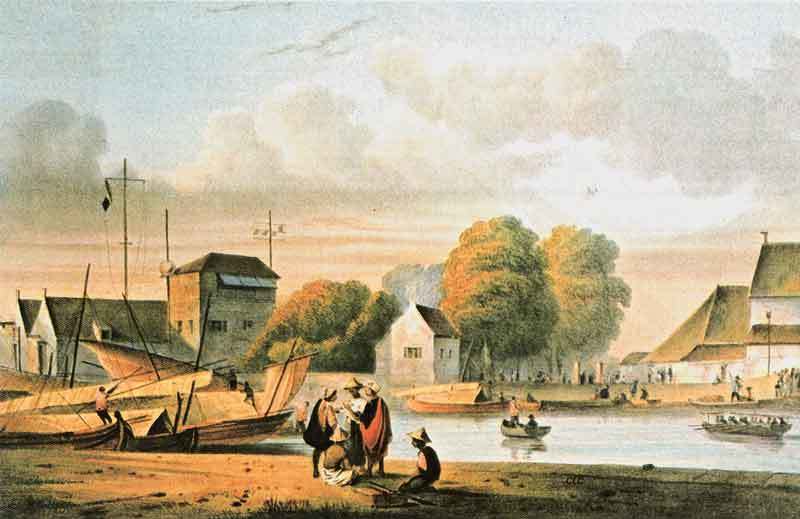 The Jakarta Maritime Museum was inaugurated inside the former Dutch East India Company warehouses which is over 366 years old (constructed from 1652–1771). The museum focuses on the maritime history of Indonesia and the importance of the sea to the economy of present-day Indonesia. 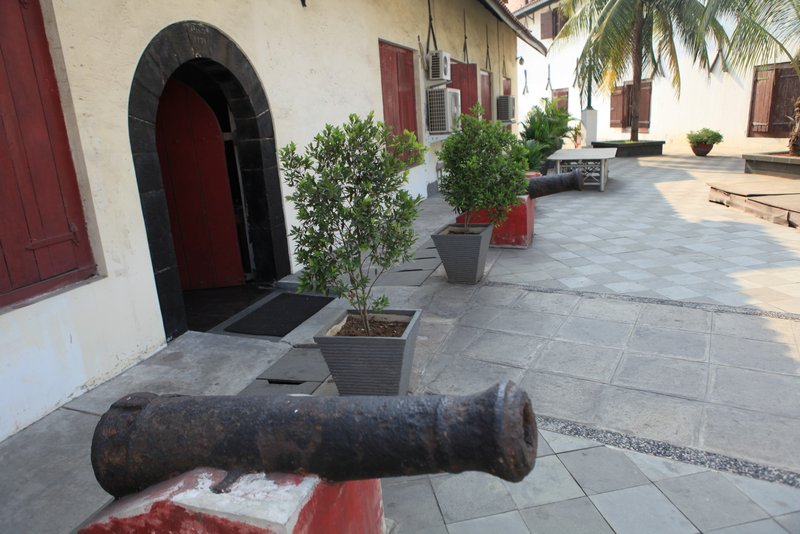 “Bastion Culemborg in the 1840s by C.W.M. van de Velde” Showing the Signal Tower, built in 1839, with the time ball on the roof at the left side of the building. The second Lookout Tower was not yet built. On the far right are seen the VOC warehouses, now the Maritime Museum. The big trees in the middle of the drawing are at the site of the former Stadswaterpoort or entrance gate to the city from the sea, dismantled in the early 19th century

In the field of traditional sailing, the museum owns various ship models from around the Indonesian archipelago. A model of Majapahit ship of ancient Java was in display, it is based on the Borobudur ship depicted on bas-relief from Borobudur temple. A particularly rare collection is the traditional vessels of Pinisi, Lancang, and Gelati are on show. There is also an exhibition of shipbuilding tools & descriptions of the maritime traditions and folklore of the region. 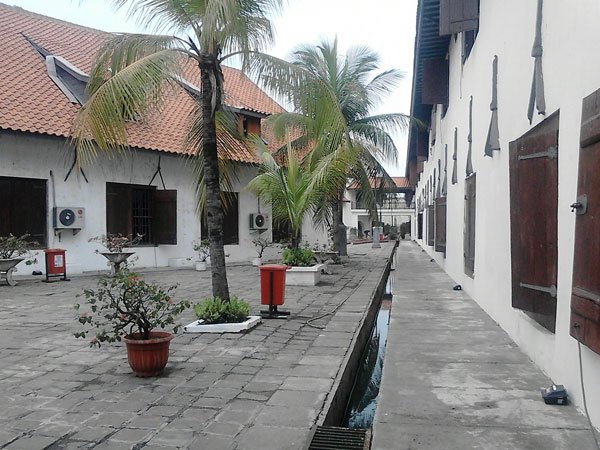 The museum displays models of fishing boats and other maritime objects from different parts of Indonesia. The museum also exhibits the celebrated Pinisi schooners of the Bugis people of South Sulawesi, which at present make up one of the last sea-going sailing fleets in the world.

In January 2018, much of the museum was destroyed by a fire

Jakarta Tourism Agency head Tinia Budiati said several countries had offered to help restore the city’s Maritime Museum in North Jakarta, which was razed by a fire in January 2017.

“Not only the Netherlands, other countries are also concerned about the museum. Most of them are willing to help restore the museum back to how it was. The plan will be coordinated by Governor Anies Baswedan,” Tinia said Tuesday, as quoted by wartakota.tribunnews.com

She added that the agency preferred to be able to restore the historical items that were damaged by fire. So far, they have been collecting data and waiting for a forensics report from the police.

On Jan.16, the museum was engulfed in flames, causing damage to much of its collection. The renovation of the museum, which is located in a 366-year-old building from the Dutch colonial era, was completed just two months ago. The fire was allegedly caused by an electrical short circuit.